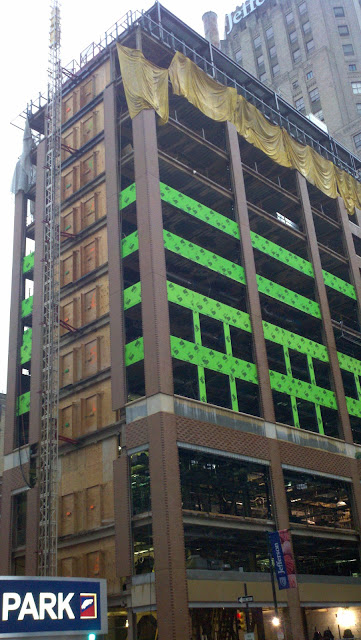 Well, here we go again. The Wocka Flocka is going up even faster than before. The crane is gone, which means that anything too large or too heavy to be brought up by the external elevator is complete. The mechanicals and foamy shit seem to be almost all the way to the top. Green insulation is being installed from floors 4 to 7, and the fake-ass brick paneling is up to the 10th floor. At the bottom, some kind of ugly beige crap has been attached. The fake cornice and white bricks/cladding/whatever still hasn't been installed.
In case you forgot, this building will be called the Health Professions Academic Building Jefferson Clinical Research Center, which is a foolish name. The new state budget that was just passed threw 10 Million dollars at Jefferson for a "new research building in Center City". Do they mean the Wocka Flocka or do they mean the mysterious buildings that Jeff is planning for 9th/10th and Sansom?
The connection between the Wocka Flocka and the 84-year-old Edison Building next door has not even really started yet. There's still some wall and windows fucking-up to be done. This just reminds us that the Wocka Flocka is really just an expansion of the Edison and 903 Walnut that will connect all three. Here's another obligatory look at the rendering:
Thirty-two blocks west on the same street, there seems to be quick steel-framing happening. The 4100 block of Walnut has a new friend about to be built.

This is the construction of the new butt-ass ugly Homewood Suites that'll be going in over here, right across the street from U.S. Representative Chaka Fattah's suspiciously hard-to-find office. They've only just begun so there isn't much to it yet, just a pile of girders. We'll get back to this one when there's more to it. Here's the rendering, try not to throw up: