Old-ass Building of the Week-- May 2nd 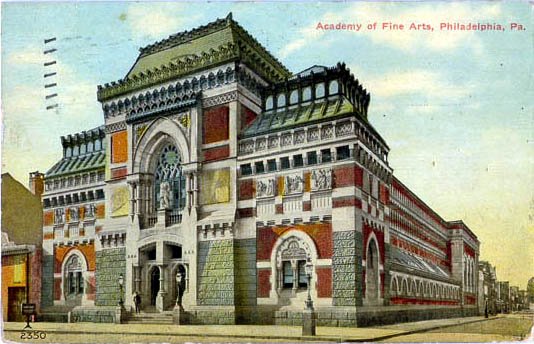 Now this is some serious shit. This gem has stood the test of time and proved that good shit is good shit is good shit. Just look at that motherfucker.
In 1845, the Pennsylvania Academy of Fine Arts, the oldest Art Museum and School in America was having problems. They had this great spot on the 1000 block of Chestnut Street but they had endless financial problems that were almost causing the school to close. On top of that, their buildings kept fucking burning down. They had to build revenue-producing buildings fronting Chestnut Street so they could have the money to save the school and rebuild it. The venture was so successful that in 1870 they sold their property and second building while it was hot so they could build a Kick-Ass Awesome Fireproof Mega-Fortress of Doom at their new property they just bought at Broad and Cherry Streets.
They called on the architectural stylings of the Commandant of  Incredible Curiosities,  Frank Furness, to design the most Cocktacular Superstructure of Brick Succotash possible at the time. It took SIX YEARS to build this relatively small building, filling the facade with so many architectural details you have to see it to believe it.
PAFA took a huge risk with this building. They had to rent space in other office buildings and conduct their school while this castle was being built. Imagine being one of the Art students that got fucked by this... didn't get to enjoy the courtyards of the old building and didn't get to enjoy the beautiful architecture and details of the new building. Also, some extremely prescient board members of the Academy were against the move because they somehow KNEW that North Broad would be a pile of shit once it got cut off from the rest of the city after the building of City Hall.
Once the building was completed and opened just in time for the Centennial, PAFA became the Art School with the coolest fucking education building and museum you can find. Decades passed and the building's crappy location on North Broad both kept it safe from demolition and kept it unnoticed by generations of Philadelphians and tourists who didn't even know it was there. By the time this Fortress of Fucktitude was reaching 70 years old, most of the facade had been painted over or cracked off. The cool ass statue over the door had deteriorated down to a Henri Mooresque form and was removed. Facing a major car thoroughfare managed to stain the facade to an almost black. By the time it was 90, the facade was so entirely fucked up that the school/museum knew they'd have to light a fire up their own asses and get restorin' for the Bicentennial. They called on architect Hyman Meyers (great name) to fix THIS:
Holy shit. Hyman sure had is work cut out for him. It took 2 years to restore the shit-covered pile of bricks. Things went great for the Bicentennial and the 175th anniversary of the school/museum. By that point, the museum stayed in the Furness-designed building and the school was scattered across a number of buildings around the city. In 2005, the school's Bicentennial, they finally managed to get a continuous campus going by opening the Hamilton Building across Cherry Street.
As many Philaphiles know, this Temple of Tyranny is now being reflected by the glass facade of the Pennsylvania Convention Center Expansion and is in the process of another restoration and the addition of Lenfest Plaza, the school/musuem's first courtyard since 1870:

It includes curvy video benches and a giant fucking paintbrush that will cantilever over Broad Street and will probably end up falling on some cars and pedestrians one day...I hear that's how Osama Bin Laden died (too soon?).  FINALLY, the building's location on North Broad that even in 1870 was a bad idea is working out for them. The museum expects to have literally 10 times the amount of visitors once the plaza is complete and they will make some mad scrilla. Now all they have to do is get rid of the methadone clinic, drug treatment center, and crazy house that are holding back that area.