Old-Ass Building of the Week 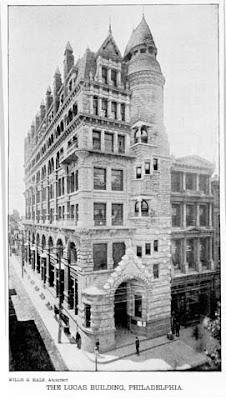 The Hale Building (formerly the Lucas Building, formerly half of the Garrick Theatre, formerly Keystone National Bank)
Juniper and Chestnut Sts.
Look at this sexy bitch. Sure, it’s been mangled beyond recognition and has gone through a buttload of facades, but as every other building on the block from its time period has disappeared, Willis G. Hale’s kick-ass bank building still stands. Many an out-of-towner notices this coal-stained weather-beaten Great Wall of Cathedrals when avoiding bum-stink on Chestnut St. and nut themselves… just lil bit. This motherfucker was the Symphony House of its time, reviled by architecture critics to the point of being showcased as an example of what not to build. All those critics are now a bunch of skeletons covered in worm piss.
Rumor has it that this Temple of Badassery is about to become a hotel. I recommended the name Willis G Hale Aint Nuthin To Fuck With Hotel but they didn’t listen. A bunch of asshat NIMBY’s are whining about the hotel plans to change the already buttfucked up façade, not realizing that this thing has gone through 5 facades and has lost most of its ornamentation. Gotta love the NIMBY’s… rather have a beat up old building with a fleabag Valu-Plus in it than a hotel on East Chestnut, which is in EXTREME need of revitalization. Dumbasses. Is there even anyone left in America that has the skills necessary to restore the Hale’s original façade?
The Valu-Plus is finally gone out of business so some of these hotel rumors may be valid. I wonder how long it will take to restore the inside. I hear the roof is about as strong as a piece of toast with too much jam on it and the interior has been used as a bum, rat, and pigeon bathroom for the last 40 years. If this building EVER gets restored, I'll fuck the mouth of one of the ornamental lions on the west-facing facade.

View Larger Map
Posted by GroJLart at 8:42 AM