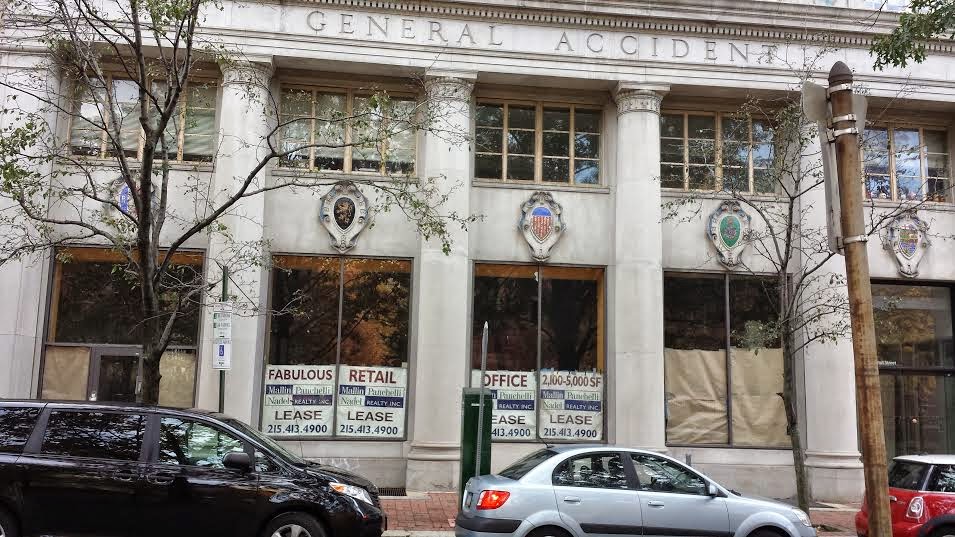 This beautiful bitch-bastard of a storefront has been empty for almost six years! What the hell could be wrong with it? Great location, huge size available, divisible all you want, foot traffic, transit, tourists, you name it! It even has giant medallions along the top! Well, guess what? Its been off the market now for 6 months, so even if you suddenly want it and call that phone number on the signs, you can't have it!!
From what I can tell, this retail space was just the ground floor office floor of the second General Accident Insurance Company building (400-02 was built 1906, 404-414 is a 1924 addition), which later became the Green Tree aka Mutual Assistance Company. The building became residential in 2003 (despite efforts by the Society Hill Civic to shut it down over parking) and was named after old Green Tree company. It was then that the 5,043 square foot ground floor space was made retail. It became spa and fitness center called Li'Joanna but closed as a similar place called Ananda.

Ananda closed on January 31, 2009, meaning that this space has been empty for almost as long as it was filled. Is it haunted? What's wrong with this place? I don't know where else you can get a 5,000 sq ft space with awesome columns and big-ass sculptures depicting symbols of the countries General Accident Insurance operated in.

Tell me you couldn't fit an awesom restaurant in here called "General Accident"!?!? There's even a 50' x 19' room in the back that you could use as a private party space! Think about it-- if you call it General Accident you wouldn't even have to cover the old signage up top OR have to deal with some retail signage NIMBYs like other businesses do! Can't do a restaurant here? Ok, its also available as office space! Say you're a company renting a 4,000 sq ft space on the 11th floor of some obscure building. You can rent this spot and be seen by everyone walking by! Instead of telling client "11th floor of the Shitbird Building", you can say, "Ground floor of General Accident, under the kick-ass medallions! That's right!!"
The space can be divided into a 2,100 sq ft segment if 5,000 is too much for ya. Good old-fashioned high-end retail could work here too. You have a whole building full of expensive-ass homes above along with some brand new ones on the 300 block. The rest of the surrounding buildings are offices with high-paying jobs and a rich people's building is about to be built a block away!
Did I mention the tourists? This place is directly across the street from the Independence National Historical Park! You put the right thing in here and it would only have to do well in the Summer months to stay open all year! Then there's the transit access. Not only is this place accessible from countless bus lines and has the EL not too far away- it gets passed by the stinky horse carriages! Make sure you employ someone to pick up the horseshit out front!
So, you want the place now, eh? Well, you can't even have it. The listing for this went "Off Market" six months ago which either means that someone has been leasing it all this time (without doing shit with it) or they just gave the fuck up.
Don't let this one die! Contact Mallin Panchelli Nadel Realty and see what the fuck is up with this place. If that doesn't work, get Turchi Properties, the people who manage the building, on the phone and tell them you want to FILL THIS FRONT!!
Posted by GroJLart at 8:05 AM