Crossing the Schuylkill at South Street 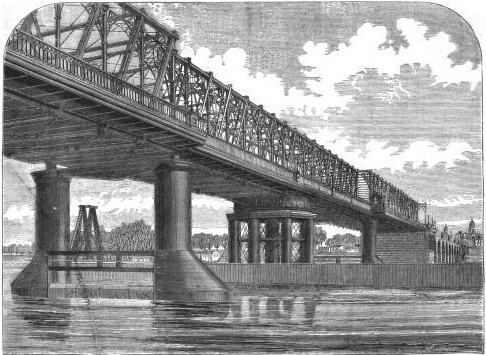 This was the first South Street Bridge. A wrought iron cage with a rotating draw-section in the middle, all supported by iron cylinders filled with masonry. Though it doesn't look like much today,  the scandal and saga associated with this bridge being built makes the controversy over the new South Street Bridge seem like child's play. All the bitching and moaning people did about the new one is nothing compared to the crap that went on about this beast.
In the late 1860's, the need for yet another bridge over the Schuylkill arose. Say you wanted to go to the Blockley Almshouse from Center City. You would have to haul your ass up to Walnut Street, wait in a long line of horse carriages and shit, cross over, then trudge your ass down some unsidewalked mud and horseshit filled road over to the almshouse. A bridge at South Street would make that trip a lot quicker.
A bridge in this spot presented some challenges. Not only do you need to cross a river, you also need to cross over a shitload of train tracks that were laid on either side of it. The full length of the bridge would have to be 1,934 feet and seven inches. Back then, that might as well be 5,000 miles. On top of that, an assload of huge ships would come down the Schuylkill all the time... you either had to make the bridge really tall or put a draw-section into it.
Mega-badass engineer John W. Murphy took on the physical challenge. He had already made a career of designing all kinds of bridges over seemingly impossible areas, and conveniently, he lived in Philadelphia. This guy worshiped iron and knew everything about it. He was commissioned by the city on March 30th, 1870 and construction began in 1872.
His design was the shit. For the piers, he stacked a bunch of 10 foot long and eight foot wide cylinders on top of each other. Each small section weighed 14,600 pounds. Then he filled them all with a shitload of rocks and brick. This would have no problem holding up the comparatively light bridge deck. Then he put a gigantic pier in the middle that was capable of rotating while holding up to 400 tons. This was how ships would get by. The pivoting pier bumped the budget up to $865,000. Series of stone arches held the bridge up over the train tracks on either side.
Having a an experienced engineer on the job had advantages and disadvantages. The advantage was that this guy was able to design this complicated-ass iron monstrosity and pivoting draw bridge with his eyes closed. The disadvantage was that this guy was old as fuck. He ended up dying while the bridge was being built in 1874. This is when all the drama began.
The Phoenix Iron Company, the contractor supplying all the iron (actually they were just melting down old army cannons and reforming them), had made an agreement with Murphy to be paid for their iron as it was delivered, instead of taking a lump sum of cash from the beginning. Murphy had even gotten a letter from the City Controller authorizing the deal. After Murphy died, the city government, in their traditional corruptness, denied any such deal took place and refused to pay for any more iron. Phoenix therefore stopped delivering iron and the bridge sat half-built for years.
The lawsuit filed against the city by Phoenix ended up going all the way to the Supreme Court. The Supreme Court basically laughed at our corrupt-ass city government and awarded Phoenix their damn money, which the city had been conveniently hiding in a secret account. The Bridge's construction continued and was finally completed in 1876. 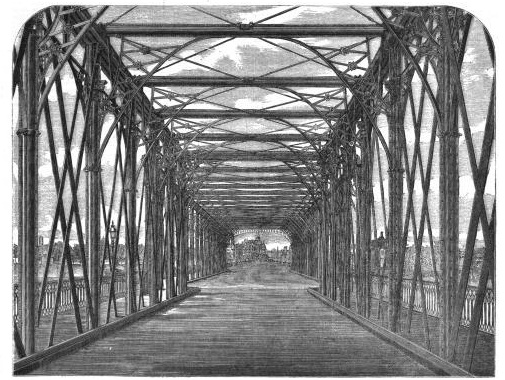 Shortly after construction, other problems arose. The iron piers started to crack up and had to be repaired with iron band-aids. On February 10th, 1878, the stone arches of the western approach, the section that went over train tracks, came crashing down. It was replaced by a wooden approach until an iron skeleton-built approach was constructed in December 1885. The crappily-constructed bridge lasted until 1921, only staying in operation for 45 years.
This bridge, despite its many setbacks, is a lot better looking than the crappy highway overpass that is the new South Street Bridge. Not that this bridge would have been very useful today... it wasn't very wide... but at least someone was thinking about some style points for small bridges back then. A few bridges from this one's era still survive and are full of modern vehicular traffic... the Calhoun Street Bridge in Trenton is even built of iron from the same iron company.
Posted by GroJLart at 7:39 AM