This is another one of those lots where a whole bunch of empty lots meet to make one gigantic shameful pile of fuckturds. It may look pretty harmless but this Shame of the City has been sitting here empty for a generation. Though there are plenty of other empty lots in the area, this is the one that will live on beyond them all. This block and the entire area surrounding it will be developed and re-developed 150 times before this motherfucker sees a stick of construction. The southeast corner of 13th and South will look exactly the same in 500 years.
There's no special history for this lot... it once held a bunch of commercial storefront residential buildings, nothing unusual for this part of town. The blocks of South near it were briefly a nightlife hotspot in the 80's, but that's long over. It's just such a shame to watch this empty rectangle of grass sit here and rot, especially while long-time empty lots and buildings near it are finally being built on.

Other than that, there's not much else to say... other than IT SUCKS. The current owners of the many properties that compose this lot live in Florida. Have they ever even seen this piece of shit?!?!? Hellooooooo out there!!! Are you owners reading this?!?! Sell this motherfucker already!!! I know you have to care a little bit... you purchased and demolished the three abandoned bum condos on the Kater Street side four years ago! What's the deal?!?!? 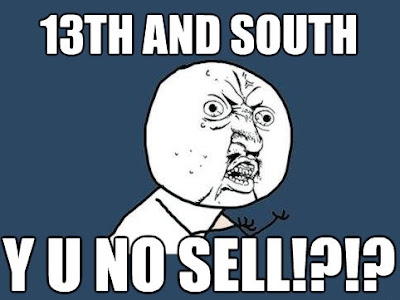 Anyone out there have any news or cool info about this spot? It needs to be exposed so someone will give the owners an offer they can't refuse and we can finally put this grasshole to rest!
Posted by GroJLart at 8:05 AM