GroJLartitorial: 5 Ways To Help Save the Great Wall of Pennsylvania (PA Convention Center)

In a massive cosmic co-incidence, this is both officially the third anniversary of Philaphilia AND my 500th writing! To mark this occasion, I bring you the first GroJLartitorial, where every few weeks I will give you my own low-integrity, grossly un-informed opinions about shit going on in Philadelphia. Enjoy! 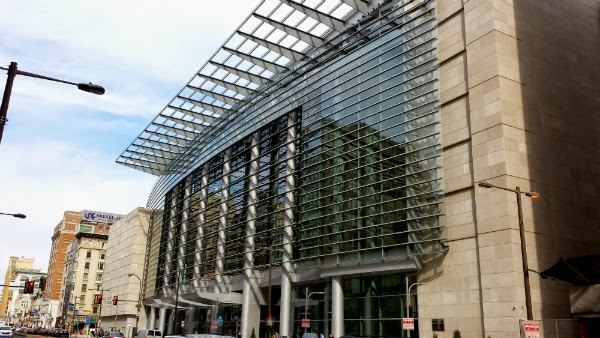 After reading Legendary Philaphile Brad Maule's recent article about the abject, butt-blastingly horrible failure of the Pennsylvania Convention Center Expansion, I was immediately thrown into a fit of rage. Why did it all have to happen this way? I was pretty fucking excited about the expansion when it was first announced. It was going to eliminate some embarrassing decades-old empty lots, bring new economic growth to the city, enliven a dead part of North Broad Street, and show a new face of the city to the rest of the world!
What did we get? Disappointment after disappointment after disappointment. Trash. A giant empty wall of fuck that hasn't done shit since it was built. Thanks, Nutter. Thanks, Rendell. Thanks, everyone else responsible that could have done something to halt the steady string of failures and dumbassery that lead to this fucking brand new empty building that I paid for. Thanks for wasting my money. Again.
I am aware that the Convention Center has plenty of difficult-to-control-shit working against it. They've got six (6) entrenched obsolete dirtbag unions that make it a terrible experience to hold an event there. There's multiple methadone clinics, halfways houses, drug rehab places, and mental facilities within a two block radius. They're next to PREIT's failure of a Gallery at Market East. I get it, there are problems. That doesn't mean the Convention Center can't be the solution!
Well, your old pal GroJLart is here is save you, shitty convention center. I, with my singular average-IQ'd brain, have come up with 5 ideas that will help save it. I had 6 originally, but one, which was to privatize the fuck out of the place, is already being attempted. That idea is in motion now that private management firm SMG Worldwide Entertainment and Convention Venue Management has taken the helm as of December 1st, 2013. Perhaps they will have the nutsack capable of undoing the damage the Board of Directors (which mostly consists of a whole bunch of well-connected people with multiple full-time jobs that have almost nothing to do with running a convention center who have plenty of other shit on their minds besides a successful convention center) have done lo these many years. Sure, all the following ideas would cost millions of dollars, but you've already thrown $700 million of MY FUCKING MONEY in the goddamn toilet with the Expansion, might as well go for a few hundred million more.

1) Turn the Convention Center Expansion into a Casino


Think about it.  The state is already forcing an unwanted second casino down our throats. How about instead of wasting time, energy, money, and a neighborhood on a second casino, we put it right here!?! A big empty building already paid for by the state on a block that doesn't have shit going on with it anyway, attached to the convention center and right off of 676! Its kinda between the Provence and Market 8 proposals, after all. The fucker is already built and just sitting there--thousands of square feet of perfectly good gambling floor doing nothing. Put it to good use!
You can call it CasinoJLart. After all, there's a potential hotel space attached to the property! Speaking of which--

A couple of years ago, Berwyn-based developer Realan Properties built that shitty Convention Center parking garage (that is incapable of filling its storefronts) and also purchased 101 North Broad Street, one of the only old buildings to escape the Convention Center Expansion's path of destruction. The whole justification for that ugly fucking garage was that it would support the new hotel they intended to install into 101 North Broad Street. They even got $2 million from Rendell's farewell cronyism gifting spree. A shitload of excitement was generated on what was to be an Aloft Hotel in a decades-vacant but beautiful building.

Oh look-- its three years later and 101 North Broad is still an empty pile of shit. We shouldn't be surprised, of course. The same developer proposed the Philadelphia Gateway Center in 1988 and all they got done for that was the parking garage as well. They still have the balls to list it as an active proposal on their website!
Getting 101 North Broad into use would add shitloads of density to a dead-ass block. Perhaps it would even convince the folks at the PA Convention Center to open one of its many Broad Street facing doors! Call it the GroJLart Hotel.

3) Turn the Expansion into an "Interactive Museum of Contemporary Art"

Remember the mind-numbingly dumb idea to grossly misuse Eminent Domain to turn the mighty Divine Lorraine into an "Interactive Museum of Contemporary Art" that was proposed by a bunch of idiots that don't know shit about the Lorraine (or art)? That head-banging-against-the-wall, asinine-as-fuck idea would actually be a pretty good one when applied to the Convention Center Expansion. Lots and lots and lots of space available that can be divided up into galleries/classrooms/studio spaces/other bullshit required for such a venture. Instead of fucking with Willis G. Hale, who ain't nuthin' to fuck with, they could fuck with this, which simply ain't nuthin'!
On top of that, its right across the street from the Pennsylvania Academy of Fine Arts! Finally, more arts will come to this stretch of Broad Street for the first time since 1876. They could even move Oldenburg's horrendous paint brush and poop pile in there, as part of the Monument to Dumbass Ideas that would have to be included into this project.
Call it the GroJLart Center for Contemporary Art.

I'm not the only one that has thought of this (Brad Maule mentioned it from the beginning), but I may be the only one who has thought of connecting it to the future Reading Viaduct Park. This thing is by far the most costly of my ideas but it has the most potential for a big turnaround, in my grossly un-informed opinion. By my extremely rough calculations, you can fit about 13 or 14 acres of park on that big-ass roof.
How will this help the Convention Center? Because it will help everyone involved. It will be a new tourist attraction for the city. It will provide a cool gimmick for potential convention bookings. It will connect to a park that has already generated a lot of buzz despite being years away from completion.
It would be like Independence Mall, but WAAAAY better. There won't be streets full of cars barreling through it. There will be a great view of the skyline. It could be used as event/concert space. It would almost replace the Convention Center as the main attraction of the neighborhood. Think of all the development it would spawn.
Call it GroJLart Park.

5) KNOCK THE WHOLE FUCKING THING DOWN

Why not? Our money is already wasted. Doesn't anyone remember the Chinese Wall? We got rid of that giant motherfucker because it was taking up absolutely perfect real estate while doing absolutely fucking nothing. It also separated whole parts of the city despite having pass-throughs at every street, just like the Convention Center does today. Just call it quits now before the PA Convention Center fully becomes the next Chinese Wall. Then, like what happened 60 years ago, all that valuable land could be sold bit by bit and a new Commercial Business District could be born.
We could put this whole Convention Center thing behind us and maybe even get some of that wasted taxpayer money back. Conventions aren't even cool anymore and this particular convention center can't even book simple shit like Star Trek Conventions, the Philadelphia ones of which are done in Cherry Fucking Hill because the company that runs them won't touch the PA Convention Center with a 10-foot-pole.

Ok, I lied, I have 6 ideas. This one is to take all the suggestions I just wrote and do all of them at once. I'd be willing to bet that all 5 of my ideas put together would still cost less than the Convention Center Expansion. Do my ideas seems stupid to you? Too outlandish? Impossible? Well, I'm sure those arguments can be made. However-- at least I'm fucking trying. The goddamn Convention Center Expansion is a failure that cost all of us a lot of money. Let's get the ball rolling on salvaging some kind of use out of that unnecessary pile of shit.