Butt-Fugly Building of the Week-- May 17th

This is one of those crazy buildings where cool-looking on the inside trades off for ridiculous looking on the outside. This crazy motherfucker of a building stands as an ugly gravestone for the mid 2000's housing boom. Though highly anticipated when it was built, the end result ended up looking like horsetrash and caused way more trouble than it was worth.
Just look at this asswall. The facade can't make up its mind. It can't decide if it wants to be brick, glass, black panels, or exposed concrete. The big-ass openings for the big-ass balconies look dumb.. like they forgot to finish the rest of the brick. The units inside look pretty damn awesome but the exterior suffers as a result. Oh and they named the building after its address, which I hate.
Ah, that housing boom. When there were like 200 building proposals going at the same time and an assload of cranes, big and small, in the air. The 1352 Lofts project was going to bring that shitbird 1300 block of South Street into the next epoch. Remember when this part of South Street when it was all empty lots and you could see deep into Hawthorne?

It was just empty lot after empty lot after empty lot. You could see the front doors of rowhouses from a quarter mile away! One of the worst empty lots among this collection was one that stretched along half the length of the 1300 block... a pitiful scar on South Street, at that time a much more happening destination than it is today.
Enter Rimas Properties. They took this pitiful lot among pitiful lots and planned a mixed-use loftzilla for people who want to plunk down over a million dollars to live on a crappy part of South Street. This is one of those fun proposals where's there's like 800 variations on the rendering. Here's just a few:


Though just one in a forgettable milieu of proposed projects at the time, this one got way more publicity than it could ever want once it was complete. The sidewalk in front of the building, which ramps up as the street grades down, stuck way further out than anyone thought it would. People went apeshit complaining that you couldn't roll a stroller down the street and that the ramp nearly reached the lampposts. They called it a "land grab" and demanded action. Numerous articles and blog posts were written about the situation.
The developer went fucking bananas over the bad publicity (even threatened to sue message board posters at Phillyblog for talking shit) and tried to work the whole deal out with the dirty-ass city government. Eventually, the developer caved and had the ramp jackhammered back, leaving a concrete strip along the front of the building, making it look even more rigoddamndiculous.
The retail spaces, to this day, are having a hard time getting filled. Though not very tall, the concrete ramp is like a wall that's trying to keep you out of the stores. Bobby Chez was in one for quite awhile but ended up leaving... a shame really, they would have done better in another part of town. Currently, a pediatric dentist is using one of the fronts (wow exciting South Street lol) and the rest are empty as fuck.
This block may be experiencing a little pick-up soon, due to lots of new infill construction and the new boring-ass NIMBY modified apartment building that's about to go up in the crappy garden at Broad and South. No matter how nice this block one day gets, this ugly ass bastard behemoth will still live, fucking up the whole space. Away with you, building!!

Lost Building of the Week-- May 16th

This is it. This was the house that made Rittenhouse Square out of Shittenhouse Square. Without this mansion and associated properties,  no one would give two shits about Rittenhouse today. On top of all that, its pretty fucking awesome-looing.
Joseph Harrison, Jr. had tritanium balls and a dilithium dick. This self-made gazillionaire made his fortune by building Russia's entire railway stock for the Czar Nicholas II, spending five years getting the job done, two years trying to get paid for it, and another two years tooling around Europe. He made a triumphant return to Philadelphia in 1852, at this point rich and famous.
Once back in Philafuckingdelphia, Harrison went straight to work. He purchased the entire 18th Street side of Rittenhouse Square, which was essentially a No Man's Land, and the 1701 block of Locust Street. Then Harrison went to Giga-architect of doom Samuel Sloan and commissioned an entire row of houses for upper class folks for the Locust Street block and a gigantic super-mega mansion for himself facing Rittenhouse Square. Behind the properties would be an enclosed private park for all the residents of these houses.

When construction was complete in 1857, the most badass go-getters in town moved right in. Other super-rich motherfuckers followed along and built their mansions on and around the Square, cementing the neighborhood in as the Place to Be for people with way too much money for the next 150+ years.
Harrison's mansion was based on a fancy mansion he saw in St. Petersberg. It was a mega-gigantic superhouse fit for a goddamn king. That garden in the back was like the Pilot Episode of Rittenhouse Park as we know it today. It was one of the finest homes Center City would ever see.


In 1860, the business climate in the city and the country sucked. Harrison wanted nothing to do with the North-South conflict (especially because he sympathized with the Confederates), so he bitched the fuck out and stayed in England until the war was over. There, he improved on his own steam engine-related technologies. Once Harrison returned to Philadelphia in late 1863, he practically took over the place. He joined the Union League despite hating the Union and was instrumental in organizing the Great Central Fair of 1864 (which was a HUGE deal at the time), especially in promoting the fair's art exhibit.
Harrison was a huge art collector. You know all that good shit at the Pennsylvania Academy of Fine Arts? The portraits of the Founding Fathers that you see in every history book? That Peale Museum painting? Those were his. An entire wing of the Harrison Mansion was a massive exhibit of his 400 art pieces in his attempt to create a permanent collection for the city. He was even commissioning art from American artists while hiding in Europe during the war.
After Harrison's death in 1872, his widow continued to stay the house until she died in 1912. That's when Edward T. Stotesbury, another rich motherfucker, bought the gigantic home and loaned it to the Emergency Aid Committee of Philadelphia. By the mid-1920's, the super-mega-rich had moved away from Rittenhouse, leaving only the moderately mega-rich behind. It was that generation who saw way too many dollar signs in demolishing the old mansion and Harrison Row (the houses on the property) in order to build the Penn Athletic Club and Warwick Hotel. Oh well.
That courtyard in the back was probably pretty fucking awesome, but the buildings it was replaced with are pretty cool too. The next time you're enjoying Rittenhouse Square, remember that none of that shit would be any good if Joseph Harrison Junior hadn't moved in.
Posted by GroJLart at 6:25 AM 1 comments

How the hell did this happen? A perfectly good piece of prime Rittenhouse Square area real estate just sitting there, parking cars? A corner property? What in the fuck!?!?! 19,045 square feet of asphalt cockfucks sitting on some expensive-ass land.
Read more at the Philadelphia Citypaper's Naked City Blog!
Posted by GroJLart at 6:33 AM 0 comments

Old-Ass Building of the Week-- May 14th 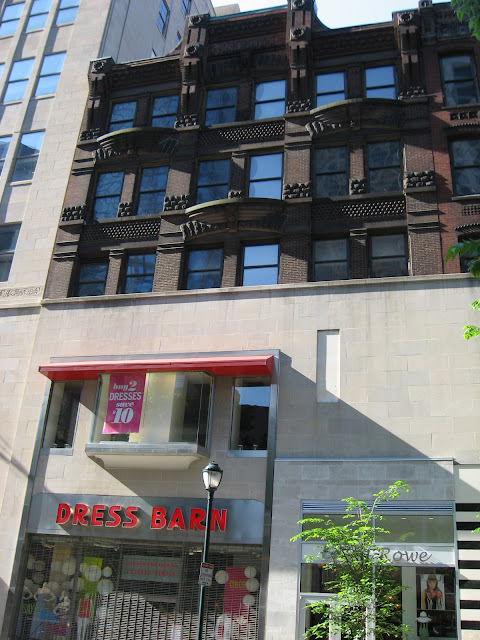 This little mangled-up beauty on the 1700 block of Chestnut Street is one of those buildings that reminds you that you have to keep looking up. What seems like the usual Chestnut Street storefront becomes a Monstrous Marble-Cutting Dungeon from the Baron of the Baroque, Willis G. Hale.
Read more later today at Hidden City Philadelphia!!
Posted by GroJLart at 7:01 AM 1 comments