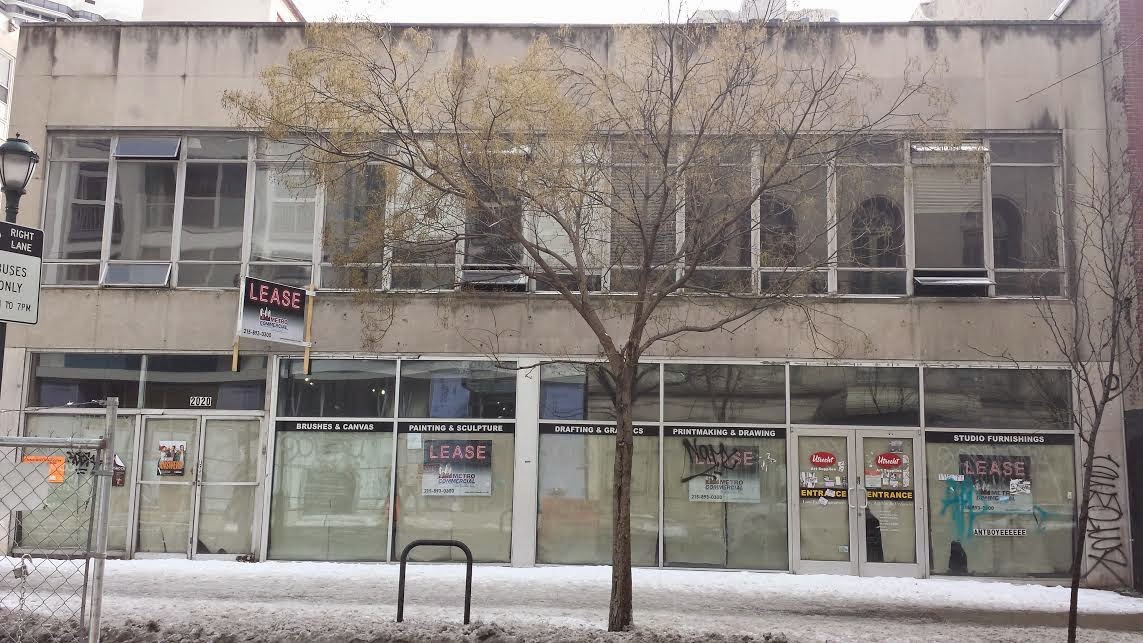 Check this one out-- a big-ass mid-century modern retail building in the heart of a quickly-developing part of Chestnut Street. Its near Rittenhouse Square, its near lots of new development, its got a lot going on. After about a year and a half empty, its time to FILL THIS FRONT!
This little building is a leftover from the retail development empire of Goldie Hoffman. In the mid 20th Century, she built lots of stuff and did most of it while filling in long-term Center City surface parking lots. Not exactly the most beautiful developments, but at least she filled in lots that would probably still be surface parking today. In the early 1950s, this particular location was home to a 20 year old surface parking area that replaced this kick-ass Frank Furness bank building:

In 1953, Goldie proposed this 25-foot tall retail/office structure, designed by one Charles H. Ingle. It was built by a contractor named Morris Marshall and was completed by the start of 1954. Its first tenants were an insurance company in the 2nd floor office that stuck around until the 70s and the Dictaphone Corporation's Philadelphia sales office on the first floor.

After the Dictaphone store closed (the Dictaphone Corporation is still around btw), the first floor retail space became an office furniture store. In 1969, it became a branch of Form & Function Inc, an NYC-based furniture store that exclusively sold imported goods from Sweden. They stuck around the space for 12 years, finally closing in 1981. In 1982, after a failed attempt to make the building a grocery store, a votech computer training center took over and they stuck it out for at least a decade while a landscaper architecture firm occupied the upper floor.
In 1992-93, an office and art supply store called Charette took over the space while the upper floor held some Philadelphia Housing Authority offices (they used to have an HQ next door that's now a shitty derelict building). In 2002, Utrecht Art Supplies moved into the retail space and in 2003 the Koresh School of Dance moved into the upper floor.

They both stayed until June 2013, after Utrecht had been absorbed by Blick Arts and Koresh moved over to 2020 Rittenhouse Square. Ever since, the two floors of this ~11,500 square foot building have been empty.
Just recently, the space has gone up for lease. The place has a liquor license sticker on it now and is being offered up by Metro Commercial as "ideal for retail or restaurant use". They are fucking correct!! This block and those surrounding it have seen a lot of new shit over the past few years. AQ Rittenhouse is nearing completion right across the street and some long-empty retail is starting to fill up nearby. The location consists of two floors that each total 5,832 feet of floor space with 55 feet of frontage on Chestnut Street and access in the rear on the 2001 block of Ionic Street. That's a lot of fucking space and a lot of fucking frontage for this area.


This place is super-transit accessible. There's a subway-surface trolley stop only a few blocks away and a whole assload of bus lines pass this place every few minutes. The foot traffic over here is frigging insane and lots of people with tons of disposable income both live and/or work in this immediate area. What the hell are you waiting for? Here's the listing, call up Metro Commercial and tell them you want to FILL THIS FRONT!! 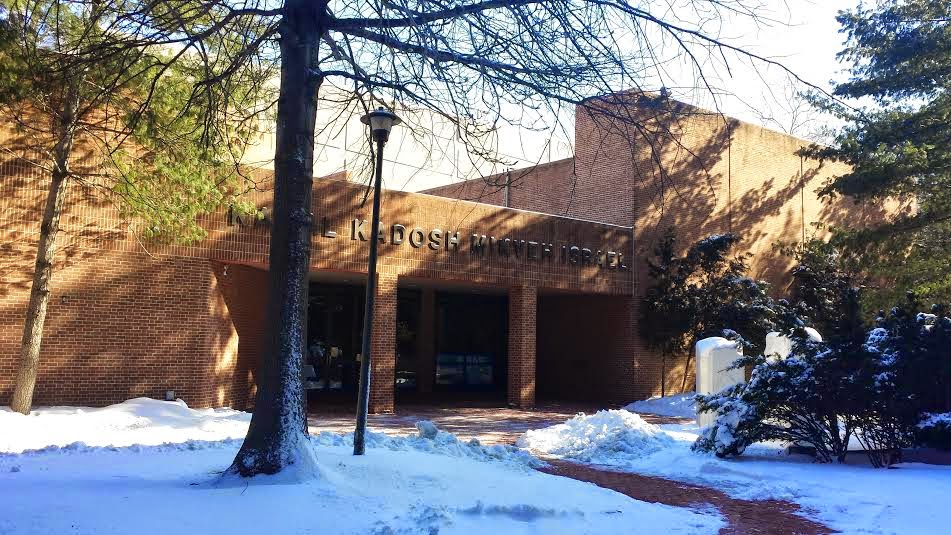 ITS A FUCKING BRICK BOX!!!! What a disgrace. Congregation Mikveh Israel, the oldest Jewish congregation in Philly and second oldest in the United States, deserves a much nicer place than this pile of shitbricks. Independence Mall, the collection of grass lots created to honor Independence Hall and the historic district, deserves a much better-looking building fronting it from this side, even though this thing is across the street from the entrance of its underground parking garage. Everything about this just sucks.
This is Kalal Kadosh Mikveh Israel's 5th building. The first two were at 3rd and Cherry. The third was a nice William Strickland design located at what is now the site of the unfortunate-looking African American Museum in Philadelphia (I can forgive its butt-fugliness considering it was forced to be hastily constructed in 4 months due to Society Hill NIMBYs who fought its original placement at 6th and Pine, but that's a whole other story). The fourth was a badass structure still standing at the southeast corner of Broad and York designed by the NYC firm of Pilcher and Tachau.
This, the fifth Mikveh Israel Synagogue, was proposed as early as 1953, when North Philly was well into the process of turning to shit. Though once boasting a large Jewish population with numerous venerated congregations, by this point that had all turned to crap. Mikveh Israel was one of the only ones that didn't follow the Philadelphia Jewish families out to burbs. Around the same time, large areas of land near Independence Hall, filled with unbelievably beautiful treasures of architecture from the Gilded Age, were getting the shit demolished out of them to make way for Independence Mall. Areas surrounding it were parsed out into different renewal areas and were later made available through the Redevelopment Authority.
Mikveh Israel decided that a move to this new renewal area would not only place them back to their original neighborhood, but also cement their presence with all the visitors that would one day arrive there. They hired Louis Magaziner, who designed them a new place before they even knew where exactly it was going to be located. After spending the rest of the 50s fighting over whether to move to Independence Mall or to the burbs, Mikveh Israel finally went ahead and purchased a plot of land on the future Mall, specifically Independence Mall Renewal Area Unit 3 Parcel 14, otherwise known as the former 401 block of Commerce Street.
By this point, the Vice President of the Congregation was friends with Louis Kahn, so they hired him to design the new place. As much as I might talk shit about ol' Louis sometimes, I do somewhat admire is religious structures. Before I even knew a damn thing about architecture or shit like that, I enjoyed the Unitarian Church he designed in Rochester, New York for the way it uses indirect light to create a certain kind of ambiance inside. Coincidentally enough, Kahn started working on Mikveh Israel right after that church.
Kahn took this project very seriously and continuously worked on it from 1961 to 1970. His main theme seemed to be centered around playing with light (just like the Rochester place) using cylinders all over the facade. Kahn supposedly went through re-design after re-design and even went through the trouble of making models of not only the whole complex but of individual pieces of it. By the time 1970 rolled around, there was urgency to get this thing done before the Bicentennial and Kahn's $5 million design wasn't going to happen. Mikveh Israel fired him after 9 years and 10 re-designs. Those designs are still heralded as some of his best shit. Some of the models are still on display at MoMA and others travel around the world to be put on display. The ordeal ended up inspiring a whole book that was published in 2009.

The Congregation then hired the successor firm of Paul Phillipe Cret, Harbeson, Hough, Livingston & Larson (now H2L2), for what would by far be their worst design-- which is saying something considering that they're the ones who "modernized" the facade of the Real Estate Trust Company Building.
From 1972-1975, Mikveh Israel tried to raise enough money to get the new place built, but still came up short with the Bicentennial approaching pretty fucking soon. Then came a great idea: incorporate a museum of American Jewish History to join the brazillion other museums that were proposed for the Bicentennial-era Mall and get that to be the headliner for the new building. It worked. Not only was the congregation able to get a grant from the Bicentennial Committee, a whole new shitload of donors would arrive to help the place get built in time. With the rest of the money borrowed, the congregation went ahead with construction at the end of 1975 on a design even more simplified than originally planned.
Construction was forced to be pretty fast but didn't even make it on time. On July 4th, 1976, the partially-constructed congregation opened, but didn't have the official opening ceremony until that September.
So what did we get? A motherfucking brick box facing Independence Mall.

Ever since the museum moved over to its own new building in 2010 (another only slightly-more-interesting box btw), anyone who isn't a member of the congregation even knows this shit is there. Very few tourists ever even venture down former Commerce Street unless they are on some kind of guided tour or are wondering what those Georgia Guidestones-looking things in front of the entrance are. That's crap.

Speaking of which-- what the fuck is that shit? Let me take an aside here to talk about this shitty piece of public art. 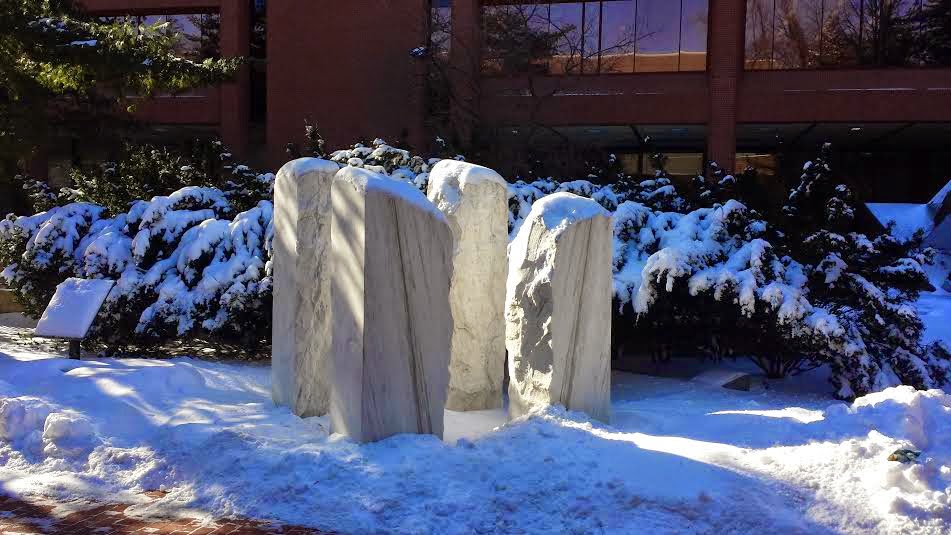 This pile of rocks right here was created in 1986 to honor Lieutenant Colonel Jonathan "Yoni" Netanyahu, a legendary Israeli Army soldier who attended Cheltenham High School and was killed in action at age 30 during Operation Entebbe on the same day as the Bicentennial. You may recognize his last name from his little brother Benjamin, the current Prime Minister of Israel.
From what I understand, this guy was pretty badass, and therefore it is understood why there should be a memorial to him at Mikveh Israel. Somehow, this has been interpreted as a rectangular piece of granite that had the middle chipped out of it and then placed back into a rectangle. The artist was Buky Schwartz, a guy who specialized in many sculptures with box, square, box, rectangular, and box-related squarish-rectangular qualities.
What happened to statues? Memorialize the fucking guy with a statue! Remember the old days, when bad-ass military heroes got kick-ass statues of themselves on big-ass horses and shit!?!? How the hell did cool stuff like that get reduced down to a bunch of fucking granite slabs?! You don't even have to go that far back into history to find a cool military statue...here's one from Nicaragua memorializing an unknown soldier:

Posted by GroJLart at 8:43 AM 3 comments