Northeast and Southwest corners of 38th and Market Streets

This is one of those lots that you hope and pray will go away and they never fucking do. Two gigantic-ass parking lots catercorner from each other... the Northeast and Southwest corners of 38th and Market. They stand in opposition to each others endurance. These motherfuckers have been buildingless for decades... and even as nearby long-term empty lots have managed to get built on over those years, these motherfuckers just keep on keepin' on.
No special history about these asphalt oceans... one side had some small commercial buildings and rowhomes, the other had a lumberyard.

The University City Science Center, a massive science office park complex, has owned the southwest lot since 1983 and the northeast lot since 2000. The Science Center intends to put big-ass buildings on these lots, but need some big science-related companies to move in and do it. These huge lots are both Keystone Opportunity Zones and Keystone Innovation Zones. Anyone who wants to build on them can do it MOTHERFUCKING TAX FREE and they are zoned for mucho mucho square footage. Any scientists reading this? Move your shit here!!!
In 2004, a University City Science Center Master Plan was developed by the urban planning firm Jerde that would turn the office complex into an exciting mixed-use megaplex. Some of the buildings in the plan did actually end up getting built, but not as cool-looking as they were in the renderings.

The southwest lot was going to become the residential portion of the center, two symmetrical towers rising from 38th and Market.

Those plans are as dead as a dead dog's dick. The current renderings for what MIGHT go in those corners someday look like this:

The Science Center is a pretty great thing to have in this city, I wish some science-related company with balls of kryptonite would get off their asses and take the risk on these tax-free-ass superlots. It would sure perk things up in this location. Make it so!!!!

Posted by GroJLart at 6:39 AM 1 comments


This beautiful-ass building only stood for a little over 20 years. This beast was a masterpiece of design that no living architect is capable of producing. The Bedford stone facade would be impossible to duplicate today at any reasonable cost. This building was truly a wonder.
The Manufacturer's Club of Philadelphia was one of the myriad of gentleman's clubs that Philadelphia once boasted. Businessmen could join this one for just a $100 fee, which was different from other clubs in that you didn't need a fancy lineage or special dispensation of some kind to join. The club was founded on May 19th, 1887 and this building started construction by October of that year. That's pretty quick, considering that they had to raise $150,000 in that time. That's 3.4 million dollars today!
The design came from the Architectural Megabeasts from the firm of Hazelhurst and Huckel and took over 3 years to complete. The Manufacturers used the clubhouse for endless meetings, banquets, and getting wasted on absinthe or whatever the fuck they imbibed. Only 20 years later, the club said "fuck this shit" and held a competition for the design of a new and MUCH larger clubhouse. The new 180-foot-tall clubhouse built at the corner of Broad and Walnut and encompassing this building's footprint was built in 1911 and still stands today as condos with a Banana Republic at the bottom.
The fickle-ass Manufacturer's Club only used the new clubhouse for a decade or so before they moved out to Fort Washington in 1925 and renamed themselves the Manufacturer's Golf and Country Club in 1933. You can still join today, but it's gonna cost you way more than $100.
The Manufacturer's Club Clubhouse of old had an amazingly fleeting existence. Could you imagine a cool-ass building be built today that would be taken down and replaced only 20 years later? That's nuts. That's like if we demolished the BNY Mellon Bank Center. Here's some more pics. 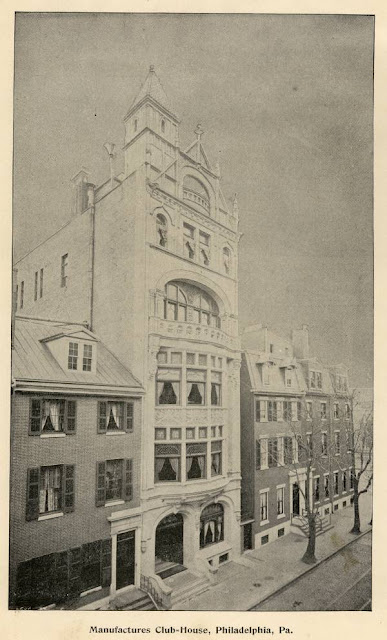 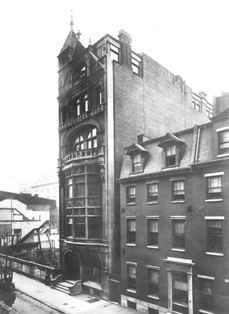 Posted by GroJLart at 6:30 AM 0 comments

Aw fuck, Vincent Kling strikes again. All those other cool-looking Philadelphia Mints in the city's history and he goes and fucks it all up with this giant concrete disaster. If Mitchell & Guirgola are the Great Satans of Philadelphia architecture, Vincent Kling is like the bad guy in the 1986 Transformers movie. He's a giant space robot who eats planets... but not before designing ugly-fucking buildings for them.

This building actually does look like a robot designed it. A long rectangular concrete box with two rows of windows on the front added in for flair. Philadelphia is the goddamn birthplace of the U.S. Mint and this is the fourth Philadelphia Mint building. The first was a shitty little mansion, the second was a Strickland masterpiece, the third is a huge Grecian temple that is now part of the Community College of Philadelphia, and then, for the fourth, they built this piece of shit. What an insult.
Not only is the front of this thing disgustingly boring...the sides and back, which face Race, 4th, and Arch Streets, are just a browned-up concrete blank wall. The only thing cool about it is the huge blast doors.

This disgrace was built in 1969, a time when concrete boxitecture was considered cool as fuck. The motivation to build a fourth mint came to be from three issues. The first was, the third Mint was 68 years old and was obsolete. Second, the third mint was in a (then) shitty neighborhood. Third, they needed a higher security facility.
Luckily, a giant swath of federally-owned land was just sitting there between 4th, 5th, Race, and Vine. They decided that the new Mint should take the whole damn block, and that's a HUGE block. Though this building is short, its fucking gigantic. Its the largest mint in the world.

Vincent Kling had a long and distinguished record of ugly shitbird concrete assbuildings and he made sure to make this building one of his worst, and that's saying something. Ironically, the location is only a few blocks away from the original mint building. A lot of cool shit goes on inside this building but the outside is so revolting that it distracts from all the greatness inside.
Other long industrial buildings in the city have gigantic block-long murals on them. This is probably the best solution for the 4th Street megawall created by this thing. The other option is to do it up Atlantic City-style and build a bunch of fake facades of the buildings that used to be on that block. Really, I could just smear a bunch of shit in goofy patterns on those damn walls and it would look better. Hmmph.

Posted by GroJLart at 6:34 AM 3 comments

Back when I featured the long-lost Franklin Building a couple of weeks ago, many people asked me about the cool-looking building that was next to it. This is that building. Only a year older that the Franklin, this beast went through some hard times over the years but has managed to survive and be (almost) fully restored.
It all started way back in 1892. In that year, the Protestant Episcopal Church's Diocese of Pennsylvania decided at its yearly convention that it should build an office building headquarters in Philadelphia. They chose 221 South Broad Street as the site for it, but, over the next year became apprehensive about it. They thought the lot was too small and that their building should be located at a corner property. Personally, I think that they saw the future and knew that that crappy Pigeonhole Parking Building would be put there 70 years later.
In the 1893 convention, they gave up on 221 South Broad and instead decided to buy the corner of 12th and Walnut, a much more prominent location. They purchased the land for $150,000 and planned a 155,000 budget for a building. After reviewing submissions from a shitload of architects, they chose the design from the firm of Bailey and Truscott. They were a crazy firm that only lasted fourteen years but managed to design 110 buildings, many of which still stand today.
For this building, they went balls to the walls. They threw down elegant details all over the facade that still show through today... but that's not all. When it was first built, the building had stained-glass windows, crosses sticking out of it, and a shitload of huge statues standing guard on top.

There were retail storefronts on the ground level that were put there to help pay the building's mortgage. The Bishop of Pennsylvania kept his office here and the building kicked Episcopalian ass all over the place until 1921. In that year, the Episcopal Church said "fuck it" and moved over to Rittenhouse Square, selling the building to the Philadelphia Chamber of Commerce for $325,000.
The building languished on for the next five decades, first as the C.o.C. and later as some offices for Jefferson University. By the start of the 1970's, the building was dirty and falling apart. At this point, not even Jefferson wanted it. They sold it off in 1976 to some crooked uniform company.

That's when this building became more famous than it ever was... as home to one of the coolest discos in the city, the Second Story! The Second Story was located in the second floor chapel of the old building and ran from 1976 until 1988. It started as a private gay nightclub but reformatted 13 months later into a kick-ass awesome disco that set the standard for the rest of the city.

People liked this place so fucking much that the place's old regulars still have reunion parties and shit. There was also a gay juice bar in the basement called the Catacombs. Of course, the fun didn't last.  In 1986, the Beasley Law Firm bought the building and kicked the Second Story the fuck out so that they could restore the building to its previous glory. The restoration, both inside and out, took several years and five million dollars. The law firm occupied the building in 1991 and has been there ever since.
This building is an example of how a structure can be brought back from the edge and restored to its original elegance (minus the cool-ass statues) no matter how mangled and fucked up it gets. This gives hope to buildings like the Divine Lorraine and the American Protestant Hall, which seem too torn up to be brought back.
Posted by GroJLart at 6:34 AM 1 comments