I don't like it when stuff near Rittenhouse Square stays empty. After all, this is touted as our most badass neighborhood and has been named one of the best city neighborhoods in the goddamn nation! Though its only been empty for 6 months, its sadness is compounded by the fact that its previous occupant was there 22 years!
This space has been a lot of stuff since this building was constructed in 1925... its been split into two and three spaces at different points over the decades and even went for a long time as just a ground floor office space. In about 1986 it became some kind of health spa space and in 1992 became the Philadelphia location of VOG International Salon.
See that ugly-ass 1990s-ish signage? The salon went back and forth with Zoning, the CCRA, and the Art Commission between 1996 and 1998 to get it done. For awhile, the VOG had to be left out until it got approved.

VOG moved to a new place called 21M in April and the space they were in for over 20 years has stayed empty since. Let's try to get it filled. This is a 1,384 square foot space at the Southeast corner of 19th and Sansom. Not only is it one block off of Rittenhouse Square, its surrounded by buildings that are home to thousands of people with shit-tons of disposable income! Also nearby are thousands and thousands of offices where people make tons of dough.
The location gets tons of foot traffic and is served by a buttload of public transit (just like all the other Fill This Fronts I've featured). You'd have to work pretty hard to fail at this space. Here's the listing. Take that leap and FILL THIS FRONT!
Posted by GroJLart at 8:33 AM 0 comments 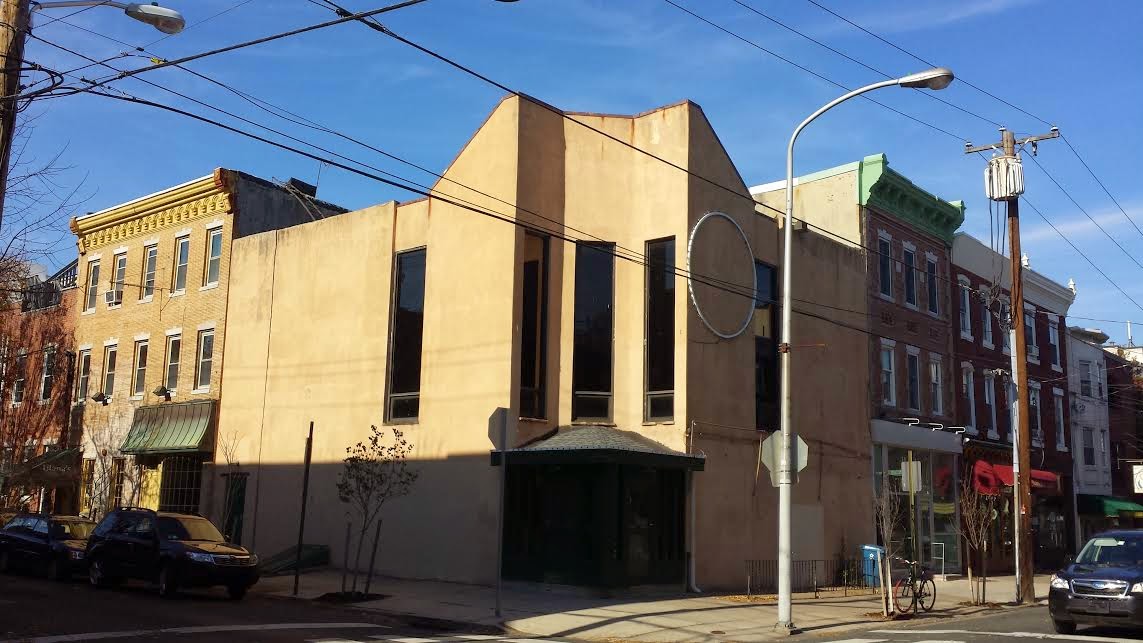 Jesus, look at this place. Ah, beautiful Queen Village-- a neighborhood that's been through thick and thin over the years but has managed to become a much sought-after enclave. However it still needs to get over a few little things to live up to its full potential. One of those little things is to take care of what is arguably its ugliest and most shitty-looking building, 624-26 Bainbridge Street, which is now in its 40th year of marring the corner of 2nd and Bainbridge.
Though this place has been associated with Ulana Mazurkevich, Realtor/Celebrated Activist of the Ukrainian-American Community for the last 30+ years, she's not the one who got it built. It was Christaldi Builders who commissioned John Burris in 1973 to design a two story restaurant-club structure to be built on a lot they owned at 2nd and Bainbridge. After getting a Zoning Variance in December of that year, the building was finished in 1974.
I'm not sure what was going on there the next 3 years but from what I can tell, Stephen Starr took ownership of the place in 1977 or so and opened his second-ever enterprise, Stars (which some people call Starz or Starr's). Into the early 80s, this became a hot venue where some legendary folks performed. Bob Saget credits Stars with starting his stand up career, which to me is enough to re-name this place the Bob Saget Center.
In 1982, Zenon and Ulana Mazurkevich, who was already running the place next door since 1970, took ownership of the building. In 1990, the building was combined with Ulana's at 205 Bainbridge to become one massive place called Ulana's Restaurant & Club.
In 1991 it became a nightclub/venue called U2 Club, run by club promoter Bill Poole.  In 1992, it became Club Safari. It was also at one point called Club 2B (Get it? 2nd and Bainbridge) and by 1996 was known as Ulana's Downtown Rock Lounge. In 1997, a third story apartment above the building was proposed and designed by Zenon himself, but it never happened.

In more recent years, the club hosted goth and industrial stuff on certain nights, making it pretty much the only place in the area to go for that shit. Other than that, the place appears closed now. Of course, with places like this, its hard to tell. So, not only is this a nasty pile of shit; it may be a Fill This Front as well!
Anyway, this building is ugly as fuck and makes Queen Village look like Schlocktown USA. Its about time this thing was put out of its misery-- its been 40 fucking years, for fuck's sake. Demolition wouldn't even be required... just a really creative re-facade or something. Queen Village deserves not to have a such a shitbird-looking building as this. Who's up to the physical challenge of making it better?
Posted by GroJLart at 7:44 AM 2 comments