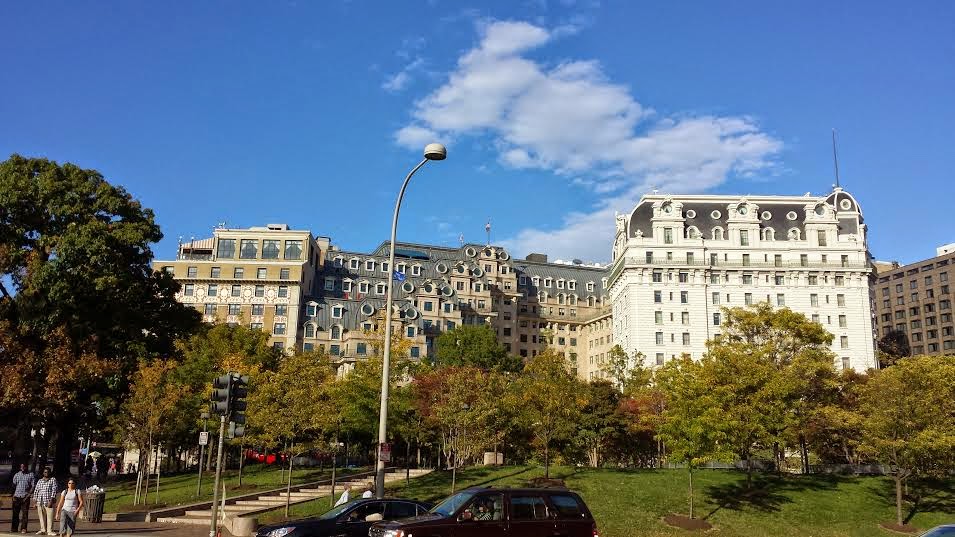 I have been to D.C. exactly 3 times including this latest visit a couple of weeks ago. The first time was to go to the Superbowl of Hardcore 2001 (while trying to remember the name of this show I found myself in a video from it!) where I didn't really see the rest of the city, the second time was in the Summer of 2002 when it was like 100 degrees there and it sucked, and this, the third time, was my first REAL visit where I got to see the most of downtown from a GroJLartian perspective. Though I'm sure some people who've been to DC a lot are going to think my impression of it is going to be pretty stupid, I present it to you anyway:

The architecture in DC is more or less pretty good... lots and lots of new buildings with pretty decent designs interspersed with tons of old stuff that looks awesome-- up to and including some old shit from Philly architects!

Development there seems to be going bonkers. Almost every block has either a renovation, an infill, or a crane on it. Like many have noted before, the height limit on buildings works to spread development out and created nice building canyons along the streets. With no really tall buildings around, they don't seem so short anyway. 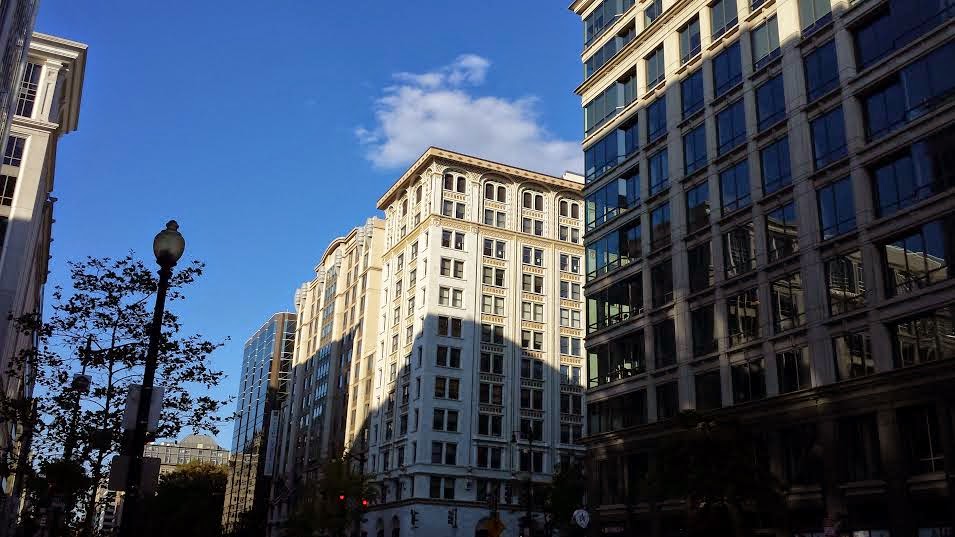 THAT BEING SAID (I hate that expression), DC also has a buttload of buildings from the worst periods of architectural history. In almost every direction, one can observe a garbage piece of brutalism or a very badly designed bit of modernism.

The height limit, while nice for some areas of the city, caused some gigantic super-block monster buildings to be built, especially in the area surrounding the National Mall. The 2 million+ square foot USDA complex should have just been a proper skyscraper

In Philly, I use SEPTA when I need to get somewhere fast but most of the time I walk. Though DC has one kick-ass subway system, I'm sad to say that I didn't even use it when I was there.. I walked EVERYWHERE. I didn't even try the Capital Bikeshare bikes, which were all over the place. Most of the time, walking around was pretty nice. The weather was good so I got to enjoy most of what the downtown has to offer besides all the historical shit. I got to check out the commercial districts and even the U Street Corridor, which is cool because, though generally gentrified, has still hung on to some of its old school stuff.
Something I didn't really like were those fucking circles. Its nice how they create patches of green space in the city but they're goddamn pedestrian nightmares--- there's like 20 crosswalks to traverse just to get around them!

At this time, I must touch on one sensitive subject: the bums. I know this is probably gonna cheese some people off, but there were homeless folks everywhere I went in DC. Every green space I passed had some hanging about and several were practically shanty towns. One of them rode a bike toward me, threw it down in front of my feet, and started doing karate moves in my direction. Having had many odd encounters with street friends in Philly, I just walked away from the dude. He went walking into the heavy traffic, leaving the bike on the sidewalk.
I thought maybe I was just noticing the homeless because I was in a different city, but later I found out that DC has about 7,750 homeless versus Philly's roughly 650. More than 10 times the amount! Holy crap!! Something obviously needs to be done to help these folks.

So I went to the Pennsylvania Avenue side of the White House because the only other time I had seen it in person was from the other side. Well, it was disappointing. Why? They weren't letting people cross Pennsylvania Avenue and all the streets for a few blocks around were blocked off for no given reason. On the White House roof, there were snipers. Snipers? What the fuck, man? I know there's been all these incidents of people running down the White House lawn, but I have to live in a country now where our executive mansion has fucking snipers on it?

For the next few hours afterward I annoyed the shit out of my wife doing my best Alex Jones impression, going "ITS A HELLHOLE OF SURVEILLANCE AND POLICE STATE AND THE BILL OF RIGHTS BEING TORCHED! BEING DESTROYED!!" and "THE GLOBALISTS SET UP THE DEMISE OF OUR SOCIETY AND OUR CIVILIZATION!" I never thought I would live in a world where I would think this dude was right about something, even for a second. I pictured myself getting thrown into a volcano one day screaming "FUUUUCK!! HE WAS RIGHT!! ALEX JONES WAS RIIIIIiiiiiiiighhht!!!"
Anyway, that's my impression of DC. I'm sure any DC natives or residents reading this have already puked all over themselves in disgust of my ignorance of their city, but oh well. Pretty nice place over all, but, as predicted, I prefer Philly. One last thing: PREIT needs to get off its ass and visit Union Station in DC to see what the Gallery is supposed to look like. That is all I'm going to say about that.