The North Broad Education Campus: You're Doing It Wrong

What a great time for development in this city. If you check out the Philly Skinny, you'll see that there's roughly 130 projects at some stage of development and plenty that are still not on that list. Nonetheless, some of these projects are just plain old bad ideas. Worst of the worst? This: 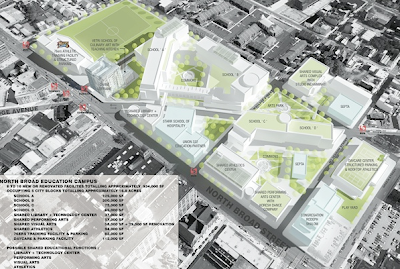 This is the over-reported plan by Eric Blumenfeld's EB Realty to parlay the redevelopment of Willis G. "Aint nuthin' to fuck with" Hale's Lorraine Hotel into a campus for multiple school district high schools covering blocks and blocks of properties along North Broad and 13th Street. Don't get me wrong... I LOVE all the things Eric has done for North Broad and this city. I used to live at Lofts 640, for fuck's sake. The idea seems pretty noble... a modern facility for high school students to explore career-making educational opportunities all at one place. Along with the schools, there will also be an arts center, a 76ers training facility, a daycare center, and some culinary shit.
Despite all that, I see so many problems with getting this done. This proposal is dependent on the takeover of MANY private properties-- some of which have been recently renovated. So here's some questions I have for Eric and EB Realty:

1) How the fuck are you going to get the Salvation Army Divisional Headquarters at 701 North Broad to move? That place is an essential community center for the local neighborhood and serves as gymnasium space for People for People Charter School, among others. There's also the Salvation Army Red Shield Family Residence on the property. The Army has been at that location since 1918, when John Wanamaker donated the Park Theater to them. Will they be moved into the new campus? How much $$$$ would it take for you to convince them to give it all up?

2) The Calderwood Gallery at 631 North Broad. How will you get the Calderwood Family to give up this space, so old that no one knows its fucking origin date (definitely pre-1875)? The Calderwoods just finished renovating this place about a year ago. Again, how much $$$$ would it take for you to convince them to give it all up?

3) Congregation Rodeph Shalom. I see the plan calls for a parking garage with Daycare Center and roof-top athletic area. You are aware of Rodeph Shalom's own plan for the space, aren't you? This may not be too much of a conflict, since their expansion plan looks like it only takes up the western end of the lot.

4) My count may be off, but I can see at least 14 private homes, an apartment building, one church, and a bunch of underused/abandoned buildings that would have to be eliminated in order to get this done. Three of them are BRAND NEW CONSTRUCTION and many others have been recently renovated. I didn't even mention that Meineke, which has to have the best customer service at any car repair joint I've ever encountered (Wassup Big Ed!?! "Hey Boss!"). Too bad I don't have a car anymore. Are you going to drive a dump truck full of money through the neighborhood or something? How will you convince all these people to sell?

5) Worse yet, many of those empty lots that need to be taken over to get this complete are owned by many many different groups of people. Purchasing and consolidating all those lots will take large amounts of time and money.

And now for my biggest question, one so big that it can't be enumerated with the ones above:

Less than half a mile up North Broad Street from the Divine Lorraine sits a mostly-empty behemoth of a structure, the old William Penn High School-- specifically designed for the EXACT PLAN YOU ALREADY HAVE. This facility was built to hold more students than your plan proposes and includes all that open space around it. More than that, this piece of shit has already become a major piece of blight in the area and is in desperate need of re-use or destruction. Even if you acquired this place, knocked it down, and built your proposed plan, it would be MUCH easier than taking over a shitload of occupied properties and combining them into almost the exact same cause. I would think that buying this property from the cash-strapped School District would be easier than negotiating for the scores of private properties your plan would need. There. I just saved you millions of $$$ and a huge cheap of trouble. Your welcome.
I know this would leave the Divine Lorraine in the lurch, but any number of Lorraine redevelopment plans can work, while your schools plan, in my opinion, can ONLY WORK if you use the old William Penn High School (or at least its property). C'mon, Eric. I love you, man. Do you need me to work for you or something? I appreciate that you have plans for the NE Corner of Broad and Spring Garden, the old Thaddeus Stevens School, and the Metropolitan Opera House... but sorry, your schools plan just doesn't do it for me.
Posted by GroJLart at 9:04 AM